After a year of work, a lot of great additions and improvements have made it into Excalibur, and we are making good progress towards our v1.0 release! Check the development roadmap for our current plans. It's hard to believe how different things are now since the first commit of Excalibur (back when it was called GameTS)!

Excalibur started as a tech demo in a presentation to show how powerful TypeScript can be. The engine has come so far since then, it's really amazing!

We are really excited to share this release with you! This release contains over 30 bug fixes and 50 new features! It's been a labor of love over the last year by many people, and we have some big features to share.

Check out the official release!

There is a combination of features (mentioned below) that resulted in big performance gains. Across the board, there's been a dramatic increase in what Excalibur can do in v0.25.0 vs v0.24.5.

In the gif below, we demonstrate the graphics performance specifically.

There is much better performance across the board with a higher baseline FPS in v0.25.0 for the same number of actors. You'll notice that FPS improves over time as more actors are offscreen in v0.25.0 compared to v0.24.5. 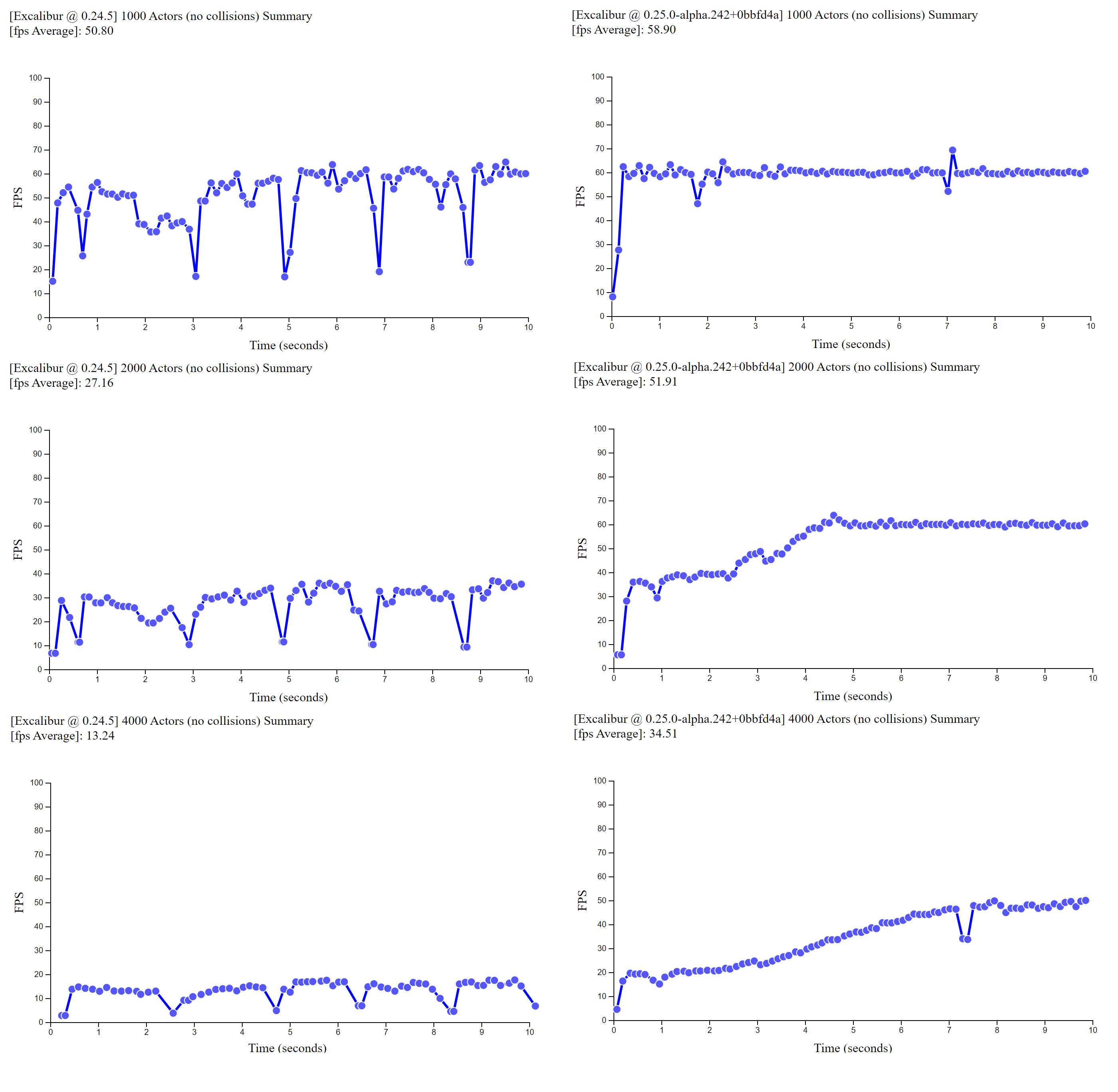 This benchmark was performed in the Chrome browser on a Surface Book 2 with the power plugged in.

We are adopting a similar versioning strategy to Angular, during pre-1.0. All plugins compatible with the core library will share the same prefix through the minor version. For example, if core Excalibur is [email protected], then the plugins that support that version are formatted like @excaliburjs/[email protected].

Excalibur DisplayModes have been refactored and renamed to clarify their utility.

The core plumbing of Excalibur has been refactored to use an ECS style architecture. However, developers using Excalibur do not need to know or care about the this underlying change to ECS if they don't want to.

What does ECS mean for Excalibur? At a high level, ECS architecture breaks down into three things:

Actor, Scene, and Engine remain as the familiar interface to build games; they're only implemented differently under-the-hood. The reason for the change was to break down ever-growing and complex logic that had accumulated in the Actor and Scene implementations into Components and Systems for maintainability. This change increases the flexibility of Excalibur, and allows you to add new novel behavior directly into the core loop with custom components ones if you desire.

Excalibur does not have the purest implementation of an ECS by design; our built-in components are more than just data. The built-in components do provide behavior, convenience features, and helper functions to maintain our core mission of keeping Excalibur easy to use. The Excalibur core team goal with ECS is flexibility and maintainability, not performance. If you wish, you can read more about our goals for ECS.

Here's A quick example of using the new ECS features:

The collision system has been significantly overhauled to improve the quality of the simulation and the stability of collisions. The core simulation loop "solver" has been redone to use an iterative impulse constraint solver, which provides a robust method of computing resolution that has improved performance and stability.

Collision intersection logic has now also been refactored to report multiple contact points at once. Multiple contacts improves the stability of stacks of colliders over single contact collisions (which can result in oscillations of boxes back and forth).

Colliding bodies can now optionally go to sleep. This relieves some of the pressure on the collision solver and improves the stability of the simulation by not moving these objects if they don't need to move. Colliders can be started asleep before a player in a game might interact with them 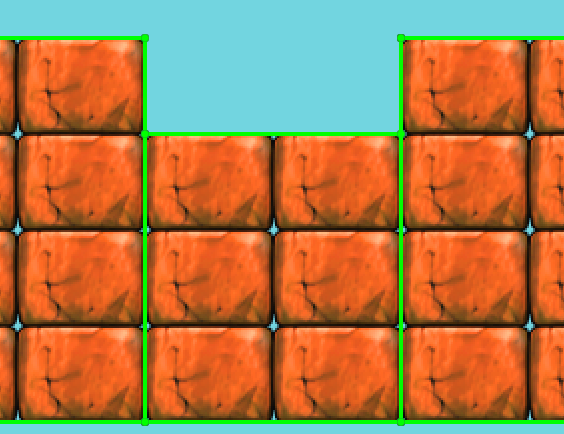 The Capsule collider is a useful geometry tool for making games with ramps or slightly jagged floors you want a character to glide over without getting stuck. This collider also helps with any "ghost collisions" that you might run into under certain conditions in your game.

CollisionGroups allow more granular control over what collides above and beyond collision type. Collsion groups allow you to create named groups of colliders like "player", "npc", or "enemy". With these groups, you can specify that players and enemies collide, player and npcs don't collide, and that npcs and enemies don't collide without needing to implement that logic in a collision event handler.

The new Excalibur graphics system has been rebuilt from the ground up with speed in mind. It is now built on a WebGL foundation with a built-in batch renderer. This means that Excalibur will batch up draw commands and submit the minimum amount of draw calls to the machine when the screen is updated. This dramatically improves the draw performance and also the number of things wec can display on screen (as noted in the benchmarks earlier).

Tiled is easily one of the best tools out there for building and designing levels for your game. It has certainly been a valuable tool in our toolbox. We have doubled down on our efforts to provide a first class Tiled integration with Excalibur via the excaliburjs/plugin-tiled. This work also involved a few improvements to the TileMap to improve it's graphics API and collision performance.

Check out the Tiled Excalibur Plugin!

A lot of time was spent reviewing and improving our documentation. Part of this work was ensuring that the snippets don't go stale over time by building them in GitHub Actions.

Please check out the new and shiny doc site with new code examples at excaliburjs.com!

The Excalibur core repo now has WallabyJS enabled to improve the VS Code test development and debugging experience. Wallaby is a paid tool; because of that Excalibur will always also support the Karma based testing framework for official tests.

A brand new integration test utility has been created called @excaliburjs/testing, which provides a quick way to drive Excalibur games with Puppeteer and do image-based snapshot testing.

There are a lot of different ways to build web apps; we've created repo templates for some of the popular ones:

We've had tons of community contributions since the last release. Heartfelt thanks to everyone in the discussions, issues and pull requests!

There are some breaking changes in v0.25.0 from v0.24.5; see the changelog and release notes for more specifics, but they generally fall into the categories below. See the migration guide for guidance.

I want to thank everyone who helped make this version of Excalibur possible. A lot of effort went into it and I'm really proud of what we achieved.